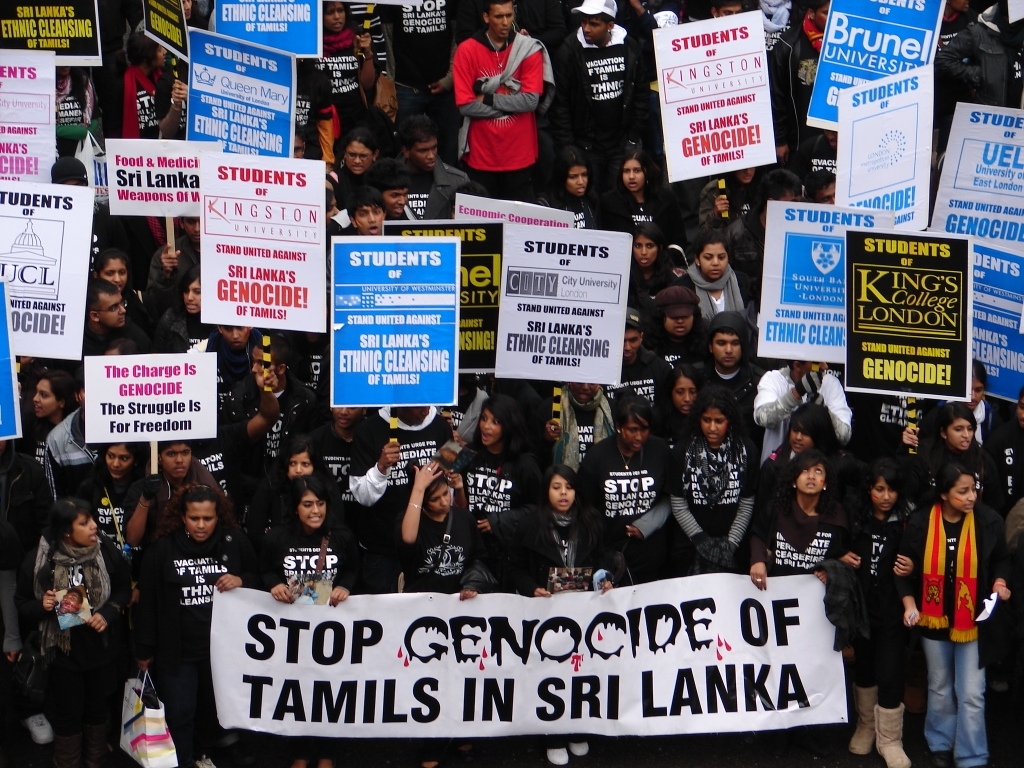 Over 200,000 Tamils took to the streets of Central London, on Saturday 11 April 2009, in a peaceful protest march to show solidarity with their brethren in Sri Lanka and to demand an immediate and permanent ceasefire in Sri Lanka. The event was part of the worldwide protest by Tamils against the international community’s inaction in the face of Genocide, with overwhelming evidence, demanding justice and urgent action from the International Community.

The march commenced at the Embankment beside the River Thames at 1pm and snaked through famous London landmarks of Trafalgar Square, Piccadilly Circus, Green Park, Park Lane and Marble Arch to reach the Hyde Park for a rally at 4.30pm. As the front of the march was reaching Hyde Park protesters were still joining the march near its starting point at Embankment.

As with recent protests the second and third generation young British Tamils were at the forefront and orchestrating the protest. The ocean of red and yellow (Tamil Eelam national colours) accompanied by beating of drums, drew the attention of bystanders and tourists who photographed the march while many of them were curious to find out more about the protest.

“The largest gathering ever of Tamils in London where two in three Tamils in the UK took part is an indication of the outrage felt by Tamils at the Sri Lankan state for its genocide of Tamils and the International Community for their equally brutal inaction” said a spokesperson from the British Tamils Forum who organised the protest.

As another first for Tamil protests, all mainstream broadcast media and many of the print media and news agencies were present covering the event.

The Metropolitan Police provided assistance with efficient traffic control while showing sensitivity and respect for the feelings of this large and peaceful gathering of Tamils. “We have never seen anything like this before” said an officer in charge, overwhelmed by the orderly mannerism of such a mass number of protesters.

Some quotes from the speakers at the rally:

All we are asking is that our government take the initiative and bring about a UN resolution to implement an immediate and permanent ceasefire.

We will channel our passion & persistence into achieving a ceasefire and bringing to a halt the killings.

We have managed to speak to Dr Varatha Rajah, who is one of two doctors, who are caring for the injured and the sick in Vanni, Sri Lanka.

Dr Rajah has confirmed what we always feared that there are more than 300,000 innocent civilians within the no-fire zone. There is an acute shortage of medicines, there are no antibiotics; there is grave risk that diseases will spread, particularly amongst children, due to lack of proper sanitation.

Dr Rajah has confirmed the SLA forces are firing from 800m from the makeshift hospital. He said and I quote, “I can see them with my bare eyes. Yes they are using RPG and firing at us.” We are now convinced that there is an immediate danger facing civilians from indiscriminate shelling. We call for permanent ceasefire at the UN Security Council not tomorrow but NOW.

We must work together, not just the British Government but the whole international community must come together.

On behalf of George Galloway, we stand against the complicity of the British government with the Sri Lankan Government’s Genocide in what should be an independent Tamil homeland. The British Government is still shaking hands with the Government of Sri Lanka. They are helping to arm and train the Sri Lankan Army.

The symbolism of the two brave hunger strikers – they symbolise the anger against the Sri Lankan government and the refusal of the Labour government to act. The British government must make a firm stand against the aggression towards the Tamil people.

More than 200,000 of you have gathered here today to protest against Sri Lankan state genocide against the Tamil people to demand freedom to Tamils. These are positive steps, clearly indicating the Tamils’ strength and potential. After this demonstration we expect more effective action is required from the UK government to bring about an immediate and permanent ceasefire.

The GA report submitted in March states that the population in the Vanni is over 300,000 while the Government of Sri Lanka continues to understate this figure – Has the SL government planned to exterminate the unaccounted Tamils?

I first spoke in support of the Tamils in July 1983, in Hyde Park just after the riots then, 26 years later, we are still meeting, still marching and still demonstrating. Well over 200,000 people are here and I can still see marchers walking along Park Lane (towards Hyde Park). It is sad that I still can’t see more people from other communities. People must wake up and demand NOW for an immediate ceasefire. Process of sanctions must also be followed.

I am surprised that many people are still happy to holiday in Sri Lanka knowing that a few miles away there are 200,000 Tamils imminently facing bombardment.

How can the UN Security Council call an emergency meeting with just 2 hours notice in response to North Korea setting off an unarmed missile that did not attack anybody – Why no special meeting now to condemn the deaths of so many Tamil people?

I do appeal to all the other communities and people of this great city of London to come together and join in this condemnation of the attacks, the murders and the killings, tragically gone on for so long of many beautiful lives of innocent people in the Tamil heartland.

No decent government can wage war on their own people and commit genocide. The (British) Government is going to the UN next week with Tamils to ask for action. But the time has come to stop the talks, it’s time for the British government itself to act straight away to impose economic sanctions and to ban the sale of arms which is being used to kill (Tamil) people today.

British Tamils are exercising the democratic right to protest peacefully. We don’t want another Darfur, or another Rwanda. We must have a ceasefire.

I climbed Mount Kilimanjaro in 4 days, almost 25 hours ago I was there at the top.

18 years ago my brother was brutally killed in front of my eyes. When my father went to the Sri Lankan Army camp in search for justice he was tortured for six months, 18 years later I’m asking the International community to do something about it. I kept quiet, thinking that they would do something about it, but I have been naive, I cannot sit and do nothing anymore. I did this for my people. International Community – Please wake up!

In Sri Lanka, there is no safe place for Tamils.

Cllr Julian Bell, Leader of the Labour Group in Ealing

I would like to congratulate everyone who has been in Parliament Square this week, I have been with you every day, and it has been an excellent effort to focus the eyes of the world on this resolution that we need desperately. We need an emergency meeting at the Security Council right now – This IS an Emergency!

These flags that you hold today are the Tamil National Flag. I would be happy to tell the Police and others, the difference between the national flag and the flag of the LTTE.

Today I call on the British Government and the British media to do much more to help. The government must work in the UN and in the Commonwealth to put direct and firm pressure on the Government of Sri Lanka.

The British media must also start to report this crisis in a fair and balanced way. You would not know from the media that there is a humanitarian catastrophe in Sri Lanka.

We need a ceasefire NOW. We need humanitarian aid to be allowed in NOW. And finally, we need negotiations to a lasting solution that must be acceptable to the Tamil people.

Britain has a moral responsibility to redress the blunder it made, by leaving the minority Tamils to be butchered and slaughtered by successive governments of Sri Lanka. We are seeking a homeland not just because we want to assert our right for self-determination, we need a homeland because we need security.

Often in the media, this conflict is reported as something that is taking place between two parties – the Government of Sri Lanka and Liberation Tigers of Tamil Eelam. Let’s not forget that Mr Prabaharan, the leader of the Liberation Tigers of Tamil Eelam was only 4 years old when the first anti Tamil riots took place in 1958, in which hundreds and thousands of Tamils were killed and their assets were looted. Mr Prabaharan was a young boy when the state sponsored colonisation was carried out – throughout the 1960’s.

We the British Tamils are asking our Government – what is next? We do not want any more statements from the Foreign and Commonwealth Office. We want action! We want the opposition politicians to hold the Government to account. Let’s tell the Government of Sri Lanka that it is no more an internal matter but an international crisis. It is about time that our Government and the International Community understand the urgency and apply the principles of ‘responsibility to protect’. The need of the hour is a ceasefire. We call on our Prime Minister and the Foreign Secretary to show leadership in securing a resolution at the United Nations to implement a ceasefire immediately. Not tomorrow! Not next week!! – But today and now!!! – Because tomorrow, will be too late.

The Full text of the Statement released by British Tamils Forum is available at:

Mr Pathmanathan of the British Tamils Forum addressed the crowd with the Statement in Tamil.

Following on from the speeches Sivatharsan Sivakumaravel, one of the youths on hunger strike, was wheel chaired to the rally by his fellow students and friends. He was joined by MP Simon Hughes, who has been handling negotiations with the youths since Monday. Simon Hughes MP, described the youngsters protesting at Parliament Square as “Amazing, brave and extremely honourable group of young people, many of them students, who are absolutely the role models everybody would wish for, for their daughters and their sons.” MP Hughes highlighted the persistency of the youngsters to have demanded that political action is implemented within the next 10 days. As a result, MP Simon Hughes, conveyed that four meetings had been scheduled for next week, between UK MPs, MEPs and members of the Tamil Youth, including Sivatharsan Sivakumaravel, with

Sivatharsan Sivakumaravel, in a brief address, re-iterated that “Our hunger strike has not ended and it will not end until a permanent solution is reached. We need your support, your strength is our strength.”

The rally came to a close at 6pm with the following declaration made by the Tamil Diaspora:

In the Vanni region of Sri Lanka, over 300,000 of our brothers and sisters, encircled by the genocidal Sri Lankan armed forces in a narrow strip of land, are facing an imminent possibility of large scale massacre. We the British Tamils together with the World Tamils are determined and stand united to pressure the international community to end the hostilities and implement an immediate and permanent ceasefire through a United Nations Resolution.